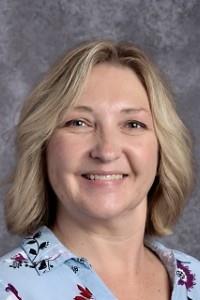 Southwest Missouri State University B.S. - Elementary Education with an emphasis in Behavior Disorders and Learning Disabilities Columbus State University M.Ed - Mental Retardation Professional Accomplishments: While teaching in Columbus, GA, I represented my school as their Teacher of the Year in 1995.

I am originally from Missouri and grew up in a small town called Cuba. I am married to Daryl, who works as a border patrol agent.  I have two daughters. Gillian is a senior at Northern Arizona University, and Olivia is a freshman at Arizona State University. I also have a dog named, Tyler.

I have always wanted to be a teacher and would play school either by myself or with my younger brothers. I realized that I wanted to be a special education teacher while in college, and I was able to have a connection with a special needs boy and have never had an interest in doing anything else.

I taught middle school resource classes my first two years of teaching.  A couple of years after I moved out of Missouri, I received a letter from one of my former middle school students thanking me for believing in her and giving her the confidence to know that she could complete her school work and do so many things.  She was able to be dismissed from special education.  Her letter to me help validate that I was in the correct profession.